Add Muscle To Your Presentations With Arnold Schwarzenegger 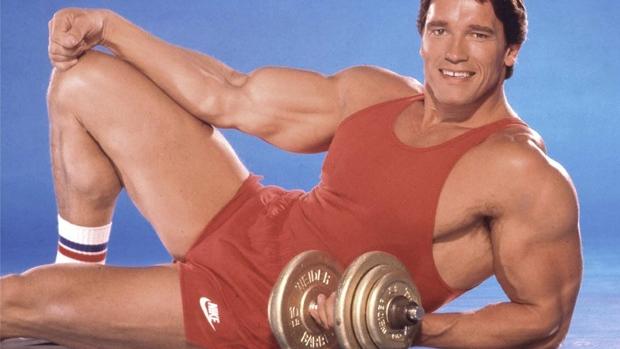 There’s only been one occasion in my life where I’ve been mistaken for being that relentless body-builder and fearless action man Arnold Schwarzenegger. 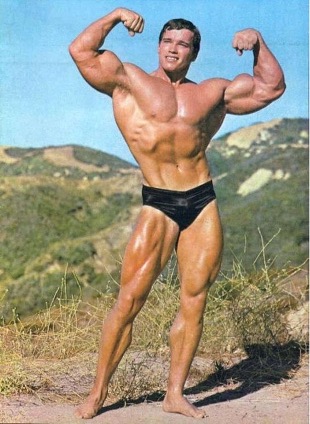 It was just after my first visit to London in 1980 when I went to Madame Tussaud’s – the tourist attraction in Baker Street that’s full of wax models of assorted famous people, including Arnie himself. 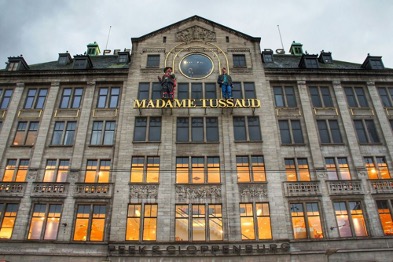 At the exit point things were set up so you could pay to pose with the Arnold Schwarzenegger waxwork and receive a photographic reminder of the occasion.

The Dodd-Schwarzenegger photograph was duly posted back to Australia whereupon it was shown to many who knew me – and also to one woman who didn’t.

When this particular woman saw the photo, she was under the impression that Michael Dodd was actually Arnold Schwarzenegger.

So word came in a return letter that she had been mightily impressed by the magnificence of my muscled body…. at least until she learned the disappointing truth.

Alas no one to my knowledge has ever since mistaken me for Arnold Schwarzenegger – and sadly the photo has somehow disappeared.

But to give you an idea of what it used to be like when you could be photographed with the Arnie waxwork, the Madame Tussauds tourist shots looked a bit like this… 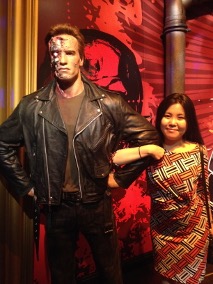 Since those days Arnold Schwarzenegger has gone on to make a name for himself as something of a professional speaker.

And his rhetorical skills became such that they even helped him become the Governor of California from 2003 to 2011, no less.

So whether or not you like the Schwarzenegger performances as The Terminator, Conan The Barbarian and The Last Action Hero – or whether you think they’re undeserving of critical acclaim – Arnie does have significant skills as a speaker.

If you disagree with this assessment, don’t tell me.

Go to California and tell him…..if you dare! 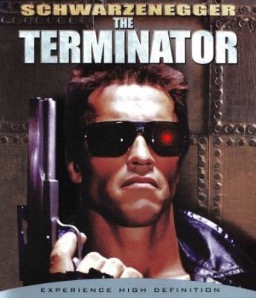 Arnold Schwarzenegger also has a colossal ego which a critic might say sometimes shines through his presentations just a little too much.

But having said this, a number of things he does in his speeches are impressive.

His delivery pace is comfortable to absorb and powerfully dramatic.

He presents with an excellent combination of the factual and emotional.

And something, in particular, that’s worth considering adopting is the way Arnold Schwarzenegger tells aspects of his own life story to illustrate key points.

This enables him to put his own distinctly personal stamp on his presentations.

And it gives them a certain authenticity.

You can check out an example of how Arnold Schwarzenegger does it in this speech here:

When a speaker’s back story is in line with his or her own message, it radiates a power that it might not otherwise have.

CHOOSING YOUR MOST APPROPRIATE STORIES

Remember you don’t have to be a champion body builder or a Hollywood actor to have enlightening stories upon which to draw in your presentations.

And there are many great presenting icons beyond Arnold Schwarzenegger to check out before deciding who might be the right inspirational role model for you – if you choose to have one.

But if you have one of your own life experiences which is in line with the message you’re seeking to convey in a particular presentation, then it’s worth thinking about including it.

There’s more about individual and group sessions of “Presenting With Confidence, Impact And Pizzazz” at: 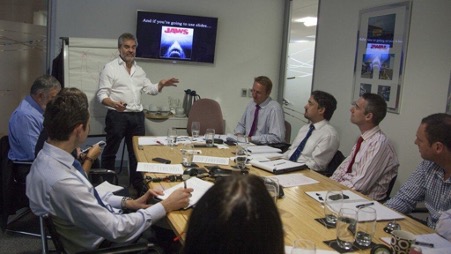 Do be aware that there’s a growing tendency where some companies want their key people to do corporate presentations, but inflict so many guidelines and restrictions on how they allow this to be done that they stifle creativity and reduce potential audience interest in what they say.

When the these guidelines are stretched or removed to allow significant personal stories or real life examples of how company offerings have helped customers, the speeches become so much more engaging …..and so much more valuable for the firm!

So I suggest being as persuasive as you can be in seeking to allow the enforcers of company rules to enable you to tell your own (approved) stories.

When done well these stories can work for the benefit of both you and your company.

More importantly still, they can work for the benefit of those who make up the audiences for your speech – online and/or face-to-face.

And if you’re worried that your presentations will become so powerful and impressive that people will mistake you for Arnold Schwarzenegger, then take it from me, worse things can happen!