Aspiring journalists can be taught key skills from scratch.

Experienced journalists can have their skills further developed and polished in areas such as interviewing and voice delivery for radio and television programmes and webcasts.

Reporters who have predominantly produced articles for the written word can be shown how to adapt their skills for the broadcast world.

And journalists who need to be interviewed about their work can be shown the techniques of how to come across with maximum confidence, impact and credibility.

Journalism teaching can be done on a one-to-one basis.

Or it can be commissioned by organisations to take place in groups – large or small.

In recent times helping journalists from the Middle East in particular has been in demand – with journalists coming to London or Michael and colleagues travelling to their part of the world.

Michael Dodd Communications can draw upon the skills of various specialist journalists and journalism teachers where required.

Michael’s broadcast journalism students at the University of Westminster between them won first, second and third place in the radio section of the Young Broadcast Journalist of the Year Award in 2007 when Michael was a senior lecturer.

The awards were conducted by the UK’s Broadcast Journalism Training Council and sponsored by the BBC, ITV News, Sky News, Channel 4 and GCap Media.

Michael received an award from the BBC when his University of Westminster post-graduate radio students won the gold, silver and bronze medals in an investigative journalism competition to mark the 25th anniversary of the Radio 4’s File On Four programme. 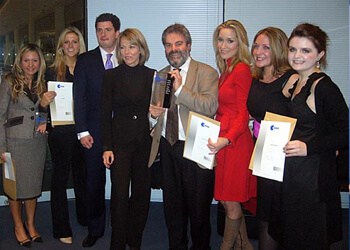 Michael’s students also won the top radio prizes in the Young Broadcast Journalist of the Year Award when the prizes were presented by Dermot Murgnahan.

Michael’s students also won the top radio prizes in the Young Broadcast Journalist of the Year Award when the prizes were presented by Dermot Murgnahan.

To book or discuss bespoke journalism teaching – whether it’s a full programme or a one-off coaching session:

or use the form on our contact page here

Postgraduate students from the University of Westminster have swept the board at a prestigious student journalism competition this week – by taking home first, second and third place in the top category.

The University’s MA Journalism course was also presented with the Award for Excellence at the ceremony at ITV News headquarters.

It is the only course to have won the award twice in the competition’s six-year history.

Michael Dodd – the student’s radio tutor on the MA in Broadcast Journalism course – said: “All of the winners have already gained good positions in radio and television and these awards should set them up for further career advancement and to position themselves to do further work investigating issues which are crying out for close examination.”

The winning entry, a documentary about the so-called ‘postcode lottery’ of breast cancer patients’ chances of access to potentially life-saving drugs, was produced by Kay Leslie and Zoe Uminski, who both now work as producers at Sky News.

It was inspired by Fiona McDiarmid, the Sky News presenter who died from the disease in 2002. Kay is a past winner of the Fiona McDiarmid annual bursary.

The second prize winners, Rebecca Donovan and Charlie Girling, explored the highly sensitive issue of what should and should not be done to save very premature babies.

It looked at the adverse consequences for some of the babies who are kept alive after being born exceptionally early.

The third prize winner, Brooke Johnston, is currently working as a producer for Channel 4 in the United States. Her entry was on the exploitation of women in Thailand by the American military forces while on recreation leave in the country.