LEARNING FROM THE GIANT OF AUSTRALIAN ORATORY

When you think of Australians, the first thing that comes to mind may not be great speech-makers. But there’s one giant Australian speechmaker who we can all take something from.Gough Whitlam – who has just died at 98 after an amazing roller-coaster of an innings – was Australia’s larger-than-life prime minister for three exciting, tumultuous and unforgettable years from 1972 until his controversial dismissal by the Governor General on Remembrance Day in 1975.

This photograph records the moment when he made his most famous speech. It was to the crowd that gathered outside Australia’s Parliament House in Canberra to protest with him immediately after he was sacked.Aptly described as Australia’s most loved and most hated Prime Minster, no one could dispute Gough Whitlam’s supremacy in his way with words – and his ability to deliver them.

As a member of the Manly Boys’ High School debating team in the 1970s, I and my team mates used to regularly insert send-ups of the Whitlam rhetorical style in our performances as we traveled around for contests against other New South Wales schools.

We did this partly because Gough Whitlam’s impact at the time was so all-pervasive, and partly because his distinctive voice – with an eccentric but impressive over-emphasis on key words – made him relatively easy to imitate.

Alas no recordings of our debating performances – nor our Whitlam impersonations – survive to this day. But much of Gough Whitlam’s speechifying has been captured for posterity.

Whitlam is most remembered for his brilliant off-the-cuff-speech on the steps of Australia’s Parliament following his dismissal. But it was his official campaign launch speech before his first election victory which I think best stands as an example of his masterly presentation style.

Admittedly it owes much to the genius of his speechwriter Graham Freudenberg who developed the knack of crafting lines which worked in perfect harmony with the Whitlam cadences. But only Gough Whitlam could have delivered the speeches in the profound, dramatic and memorable way that he did. 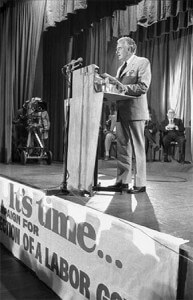 In my role as someone who seeks to help business people in particular to become inspirational communicators, it has been worth examining the construction of the start to that speech at the campaign launch in 1972 in Sydney’s western suburbs.

“Men and Women of Australia! The decision we will make for our country on the second of December is a choice between the past and the future, between the habits and fears of the past, and the demands and opportunities of the future.There are moments in history when the whole fate and future of nations can be decided by a single decision.For Australia, this is such a time.

It’s time for a new government – a Labor Government.”

And if you want to hear a sound bite from the speech in action – and see some early seventies Aussie hair styles and then-trendy music – click on the video link below: 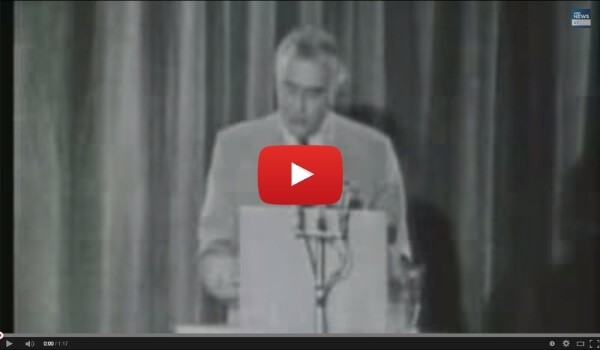 Note at the very end of the item a tiny excerpt from the man Gough Whitlam defeated – Prime Minister, Sir William McMahon – who was anything but a speechmaker of distinction.

The contrast underlines how great presentation skills can make a critical difference – and are worth making the effort to acquire and perfect – in politics, in business and elsewhere.

There’s something which is coming increasingly clear to me about great presenting the more I get into studying it and teaching it. Most people, when they hear it, instantly recognise a fantastic presentation – and a poor one. But what they often can’t do is specifically identify the underlying fundamentals that make the difference between the two.

These hard-to-see critical fundamentals that divide superb presentations from appalling ones are usually to do with content and structure. Brilliant and atrocious delivery styles are easier for people to spot. Audiences can typically identify the difference between good and bad body language, eye contact and expression in the voice. But they typically find it much more difficult to work out what’s wrong with the content and structure of a bad presentation.

These guidelines need to be disseminated far more widely. 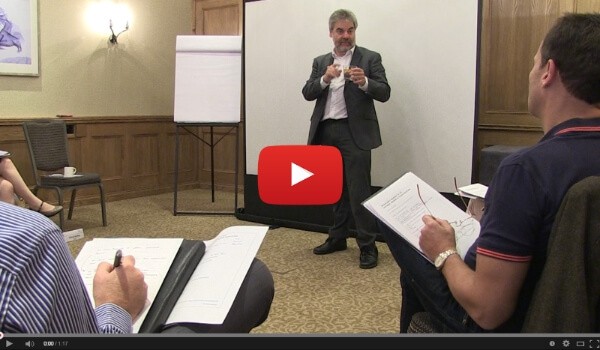 here are also formulae and methods for answering nightmare professional questions which arise during and after presentations.

Knowing what these formulae and methods are – and being able to deploy them – can make you feel so much better about the challenges you and your team get from prospects, clients, journalists and others.

There’s more on “Giving Great Answers To Tough Questions” in this video recorded in the delightful and historic southern English city of Winchester.

GOUGH WHITLAM AND YOURS TRULY

Speaking of great answers to tough questions, this is an area where Gough Whitlam was pretty impressive…though I should stress he was never trained by me!

On the tenth anniversary of his dismissal as prime minister he gave a series of clever, witty and at times bombastic answers at the launch of his book to mark the occasion. Thanks to Youtube can see his speech on line – along with his answers to questions from reporters in the National Press Club in Canberra, pictured below. 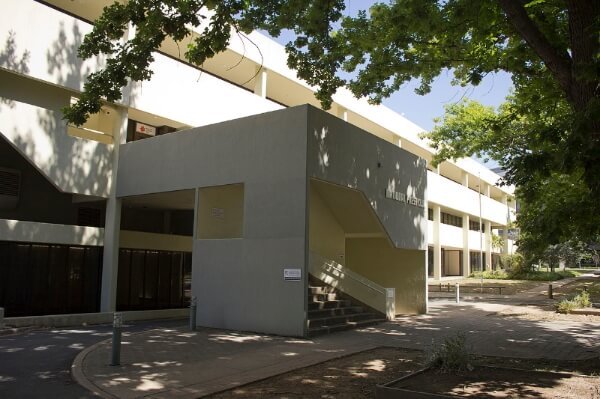 And if you don’t have time to watch the whole thing, you might like to have a quick glimpse at the bit that’s 29 minutes and 16 seconds from the start.

At this point in a young bearded reporter with a dodgy haircut from the Australian Broadcasting Corporation’s “PM” programme tries to ask the great man a question. The question was about a new allegation that there had been a “mole” inside the Whitlam Government who was feeding information to the Opposition Leader Malcolm Fraser and his deputy Philip Lynch during the 1975 constitutional crisis.

Early on the day of the tenth anniversary of the crisis, Whitlam had given a pre-recorded interview to my colleague Paul Murphy who was the compere of PM. Whitlam tries to use this earlier interview he granted as an excuse not to answer the challenging question. He also tries to head it off saying that story about the alleged mole had been broken exclusively by the Sydney Morning Herald journalist Peter Bowers.

But it didn’t stop this younger generation reporter from the ABC trying to get an answer out of the one-time national leader! 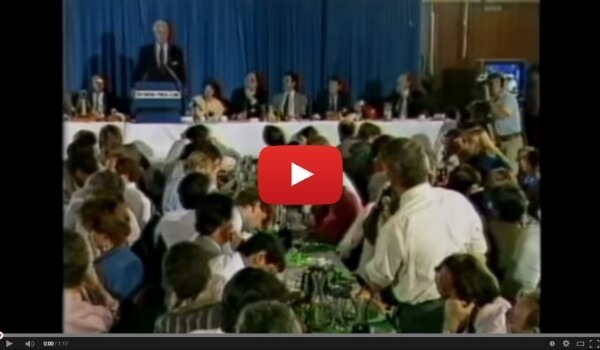 Mercifully Gough Whitlam was more forthcoming on other questions.

And I got a much more sympathetic hearing when he later came to Berlin where I was based in the 1990s.

On this later occasion he granted me a cracker of an interview about contemporary Australian and international politics – somehow encompassing vast swathes of European history along the way.

Unfortunately no one has put this on Youtube yet.

THE WHITLAM WIT ON LIFE DEATH AND BEYOND

Gough Whitlam had much to say on life, death and beyond. It wasn’t always in the best of taste, and it could be totally sacrilegious. But it was always razor sharp.

Amongst his most acerbic retorts was when he was being repeatedly questioned by a voter about his view on abortion on the campaign trail. Eventually Whitlam snapped and declared: “Let me make it quite clear that I am for abortion and, in your case Sir, we should make it retrospective.”

Gough Whitlam had a massive ego. But unlike some in this category, he was more than capable of sending himself up over his Messiah complex among other things.

The late Catholic Cardinal Edward Clancy spoke of a time when the former prime minister inquired as to whether Sydney’s St Mary’s Cathedral, pictured below, might be available for his funeral.

This was a surprise because the cardinal was not expecting a Whitlam conversion to Catholicism.

According to the Cardinal, Whitlam then insisted he didn’t actually want a Catholic funeral.

“It was because he wanted to be buried in the crypt, claiming he was willing to pay but would only require it for three days.”

However on another occasion Gough Whitlam denied having insisted that he was immortal.

Wherever you are, Gough, you will forever be remembered– in Australia and beyond.